Welcome to my blog. This is just my little spot in CyberSpace to share who I am, what I like, what I don't like and all the crazy things that go on in my world. Feel free to visit anytime. My drive-in is open 24/7. xoxo

Yes, yes...I know it's been far too long.  Not my fault of course.  Peeps. They have no understanding of priorities.  I suspect it's only going to get worse too.  Sigh.

So I'm here to tell you about a little project peeps started about...hmmm...9 months ago.  I gave it the working title Project Nemesis and so far that's fit the bill quite nicely.

Let me give you a little background.  Nemesis is this little being that lives inside my peep's belly.  It's a she.  Overall she's quite boring and really doesn't bother me much at all (which is smart of her), but one night a few weeks ago she did kick me in the head.  Obviously she has no manners.  And she's made my poor peep swell up like she's eaten a watermelon! And the waddling that goes on is just down right embarrassing!

When peeps first showed me a picture several months ago, I thought "why are they showing me a picture of Mr. Peanut?"  It made no sense to me, but then again...peeps rarely do! 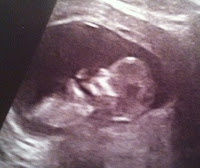 As the months went on, Mr. Peanut turned into Ms. Peanut.

And then Ms. Peanut turned into the funny little green alien from the Flintstones named Gazoo. "Hellooo dumb dumb."

Now, 9 months later, I have to say that at least she does look a bit more presentable thank goodness.


So, all in all, these last months haven't been so bad.  There was one incident involving some pink tulle that peep got with a baby gift, but I really don't think we need to go into that.  I don't want to hear it.  Yes it was pink tulle.  Yes I was wearing it.  We all have moments we aren't proud of. 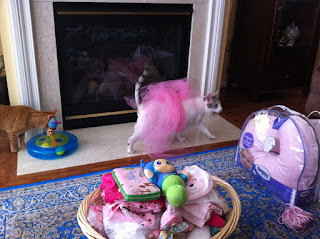 Just two days ago, peeps told me that Nemesis (they call her Madolyn) will be joining us on Friday 23 March.  Peep has been suffering from mild gestational hypertension since week 29 so she's going to be induced.  That means the doctors are going to force Nemesis out of her little house and into mine!  What the...?  All I have to say is, she's here on a trial basis.  If she's too noisy, unwilling to share her food (or...gasp...tries to take mine) or doesn't play by the rules, then I'll be sure to tell peeps that she needs to GO!  But I'm hopeful it won't come to that.  Every time I protest Nemesis, peeps tell me one thing that sticks with me.  They say "Herbie, think of it this way...we're going to raise another cat lover so that one day Madolyn can adopt a little cat like you that needs a good home and a lot of love."  How can I argue with that? :)

The many faces of me Otherwise known as my siblings

Director of Food (but not sharing):
@Wildboutbirds (HB Hoover)

If you'd like to become a member, pls contact Hollie, Cheri, HB Hoover or me. Remember, we share because we care and we care because we're hungry!